Posted on December 16, 2015 by Steven Hayward in Climate

Climate Panic: Where Do Humans Live?

The climatistas have their panties in a wad about this chart, which I posted a couple months ago and which John reposted the other day: 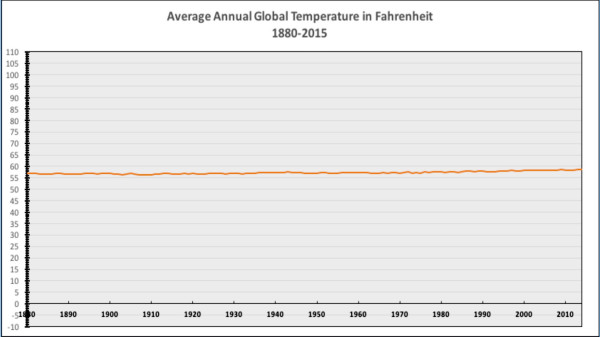 I’m reminded of a line from one of C.S. Lewis’s Narnia stories (The Magician’s Nephew), which runs: “Now the trouble about trying to make yourself stupider than you really are is that you very often succeed.” And the climatistas are certainly willing to oblige.

The purpose of that chart was to set up the following completely heretical observations, which will no doubt provoke howls of indignation, and renewed calls for my arrest and imprisonment on RICO charges, all of which culminate in the point that this chart doesn’t matter. Nor any of the charts beloved of the climatistas. (Though let me at least lay down a marker here that this chart is no more “deceptive” than Michael Mann’s infamous hockey stick graph, which magically made the medieval warm period disappear.)

Let’s start with a question that no one ever discusses: where do human beings live on this planet? Inuits have lived near the arctic in primitive conditions for thousands of years. I hear it is very cold there—often below zero for months at a time. Frankly I can’t understand why they didn’t move to Florida, but perhaps the tax rates in the Arctic were even more favorable than in the Sunshine State, or perhaps some ancient Seminole chief Big Trump built a wall. Likewise, Arabs and other tribes have lived in the desert for thousands of years where it is very hot (sometimes 125 degrees in the summer), yet became the “cradle of civilization.” (They seem to have lost that cradle lately, but that’s a subject for another day.) Hmm: seems humans can flourish in a wide range of extreme temperatures—the extremes at either end of the chart above. Yet a prospective four-degree global average temperature rise over a century or more is supposed to be the end of mankind? What kind of wimps do they take us for? This is silliness of the first order.

But let’s keep going. Let’s go back 50,000 years or so, to the beginning of the human race as we know it, when there were, by some accounts, perhaps as few as 50,000 early humans (maybe as few as 5,000 by some reckonings) mostly clustered around the Rift Valley in Africa, chiefly because the rest of the world was too cold. Like Chicago, then under about a mile of ice. Humans didn’t start to migrate around the globe in serious numbers until the last ice age ended and the place started warming up.

Oh, and about that migration thing. Five hundred years ago the North American continent was nearly empty. (South America was a very different story, but it was a lot warmer there—hmmm, what to make of that?) Every person living in America today, except for the descendants of those very early migrants we sentimentally call “native Americans,” were migrants here within the last five centuries, which is quite short even in the timescale of humanity, and needless to say a nanosecond in geologic time.

Why did this migration to America take place? Because of the white race’s murderous imperialist desire . . . sorry, thought I was on a college campus for a moment. Anyway, people came to America for a variety of reasons, many of them having to do with serious upheavals elsewhere in the world, some of them social and political, some of them physical (like the Irish potato famine, to pick one example). Heck, some of those reasons might even be climate-related, like the Little Ice Age of the 16th – 18th centuries. If only Martin Luther had known about greenhouse gases, he could have included a 96th Thesis on his famous list. The point is, human beings have been overcoming severe upheavals and disruptions since human beings first acquired opposable thumbs.

Set aside the good reasons for doubting the high temperature sensitivity that the thermageddonites depend on for their nightmare scenarios, and let’s try a thought experiment that assumes we experience warming in the high end of the predicted range. Then take a look at the globe, and notice that about one-third of the planet’s land area today is currently uninhabitable or mostly uninhabitable because it is too cold: Siberia, northern Canada, Greenland, and Antarctica. Pretty large places. Pretty habitable if the ice melted. The human story is one of continual migration. Why should the next 200 or 300 years be different than the last 500? (And I’m confused anyway: I thought being critical of migration just now meant you are a bigot or something.) Tell me again why I should quake in my boots for the long-term future of humanity? Especially since 100 years from now human population may be shrinking fast. (Some long-range demographic projections foresee human population shrinking back below 2 billion people by the year 2200; like all such projections, take it with a grain of acid-free sea-salt.)

The tradeoffs for warming—even four degrees of future warming—are overwhelmingly positive. You’re not allowed to say this, and the parade of horribles the climatistas trot out always leave out measures of human well-being. Since the world started warming—that is, since the beginning of the fossil fuel-intensive industrial revolution—human lifespan has doubled, major diseases have been conquered, and a middle class standard of living has been achieved by a majority of the world’s population, with an end to extreme poverty possibly in sight in the near term. All of those improvements coincide with vastly increased fossil fuel use; not for nothing is mass energy called “the master resource.” If indeed the most alarmist of the alarmists are correct and we warm by 4 degrees by the end of this century, it will certainly mean that there has been a vast improvement in the living standards of just about everyone on the planet, because fulfilling the doomsday climate scenario entails using lots and lots more fossil fuels. A win for humanity.

But but but!!! Climate change will be radically disruptive! Twenty-foot sea level rise! More extreme storms! Droughts! Boiling frogs! Dogs and cats living together! A perfect storm of tipping points! And 45 other clichés I forgot to mention!

The fact that climatistas want to blame present trouble in the Middle East on climate change shows what unserious historical illiterates they are. The 20-foot sea level rise is probably my favorite unserious hysteria. I have to admit that the prospect of Manhattan and the Hamptons and Malibu colony under water fills me with hope. (Calm down, humor-impaired climatistas—that’s a joke.) I’ll start to take this more seriously when real estate prices in the Hamptons or Malibu start to weaken. Good grief, even John Kerry hasn’t sold his Nantucket beachfront house. (A lot more could be said here about what price signals—and insurance rates—can tell us about future expectations. And don’t bother me with the nonsense about MunichRe.)

Which bring me to my favorite cliché—the precautionary principle! You don’t want to take the risk of uncertain and perhaps catastrophic climate damages, do you? If I really believed that in the manner of a climatista, I’d be for massive increases in nuclear power and hydropower all around the globe. Yet most environmentalists remain opposed to these two scalable technologies, and lobby the World Bank to deny any financial assistance to developing countries for these energy sources. As I say, people who take this position are not serious and should be ignored.

One way of illustrating this unseriousness is this chart, made by Roger Pielke Jr. The 14 percent of energy from non-carbon sources is overwhelmingly hydro and nuclear; wind, solar, and biomass only account for about 3 – 4 percent of total energy. Pielke’s question #3 is why none of these temperature or greenhouse gas concentration charts matter. Another proposition: if catastrophic climate change is in our future, the climate change community (liberals in general) are the last people fit to solve it, for the aforementioned reasons. And it won’t be solved by UN climate conferences. It might be solved by someone like Bill Gates, though more likely ExxonMobil. (Heh. That will really harsh some mellows.)

Kudos to climatisa grand champion James Hansen (who to his credit has supported expanding nuclear power for a long time now but who is ignored on this point by the climatistas who otherwise worship him), who said this about the Paris agreement:

“It’s just bullshit for them to say — ‘We’ll have a 2C warming target and then try to do a little better every five years. ’It’s just worthless words. There is no action, just promises. As long as fossil fuels appear to be the cheapest fuels out there, they will be continued to be burned.”

Which makes most of the climatistas reality deniers. Or perhaps we should call them carbon imperalists, since they want to deny to developing nations access to the same affordable energy that enables their comfortable lives in the industrialized west.

But but but—climate change will have huge impacts on fragile ecosystems and endangered wildlife! Which would be different from the last 5,000 years of human development exactly how? (There’s actually good reason to think the worst is over for ecosystem fragmentation and species extinction, but that’s a subject for another post another day.) One thing I do know for certain that is fragile and easily disrupted is individual freedom and democratic institutions. These have been known, by only a minority of the planet’s population, for less than 200 years. I’ve been through this here before at length, but it bears repeating that many leading climatistas openly argue for authoritarianism and against democracy in service of saving the planet. Last weekend Michael Grubb of University College London remarked to the Telegraph:

“All the evidence from the past 15 years leads me to conclude that actually delivering 1.5C is simply incompatible with democracy.”

All of which drives to this central conclusion: Environmentalists are the most reactionary social force on the planet today. Their presumption is that nothing should ever change from the way it is now—not a landscape, a river, a city neighborhood, or the climate (for whatever reason). They are the aristocrats of our time, opposed to democracy, individual liberty, change they can’t rigidly control, and censorious of the lives of ordinary middle class people. Or to restate the point more clearly: Environmentalists are a much more serious threat to human well being than climate change—even catastrophic climate change.

Finally, as to the offending chart itself. It’s great fun seeing how easily the climatistas become unhinged at the slightest deviation from orthodoxy, but in fact I was inspired to reproduce this chart (I didn’t actually come up with it—it was emailed to me by someone) because environmentalists criticized me for the charts I used to publish of ambient ozone trends in the U.S. like this one from 2001: Enviros complained: Deceptive! Misleading! Your vertical axis starting at .08 ppm (where the EPA health standard at the time was about to be lowered) exaggerates the trends! Okay, fine, I decided henceforth to start my vertical axis at zero (as displayed below), even though the natural background level of ambient ozone isn’t zero but probably around .04 or .05 ppm (depending on what region of the country), just as the lower bound of ambient global CO2 would never be zero. To be sure, the downward trend of ambient ozone doesn’t look as significant displayed this way. Happy now? But why not for global average temperature then? So when it comes to displaying global average temperature, sauce for the goose I say. Cue the indignation and outrage in three, two . . .