Posted on October 5, 2016 by Steven Hayward in Economy, Obama administration

The Obama Years in One Chart

Obama’s approval ratings are doing fairly well these days—comfortably and consistently over 50 percent. This, while the number of Americans who say the country is on the “wrong track” is at or near an all-time high. One polling guru I know says that Obama’s good numbers owe to the fact that he looks good in comparison to Hillary and Trump, which makes sense. And also that the “wrong track” number has always been negative since Roper started the question back in the early 1970s.

I’ve also seen liberals pointing out that the stock market has more than doubled since the bottom of March 2009, though this has everything to do with the Fed’s insane zero-interest rate policy than anything Obama has done. Lawrence Lindsay noted in the Wall Street Journal yesterday that Obama’s economic record is a failure when judged by Obama’s own claims for what his policies would accomplish:

The administration’s February 2010 budget submission projected that real growth would average 3.9% annually over the next five years, including 2010. As it turned out, real growth averaged only 2.2% a year during this period. One year later, the administration submitted its fiscal year 2012 budget. Equally optimistic, the budget predicted growth would average 3.9% for five years. The economy instead grew at an anemic 2% each year, according to the Bureau of Economic Analysis. . .

Put all this in perspective: The average annual growth rate from 2010-16 (again assuming 2% real growth for 2016) was 2.1%. The administration’s multiyear forecasts averaged a 71% overestimate from this figure. Compounding growth at 3.6% annually means a 28% larger economy after seven years. Compounding at only 2.1% means 15.7% growth. If the administration’s growth projections were accurate, the GDP would be about $1.8 trillion larger. That’s roughly $6,000 for every man, woman and child in the U.S.

In fact, if you want to see a good representation of the results of the Obama years, you can hardly do better than this series taken from Federal Reserve data: 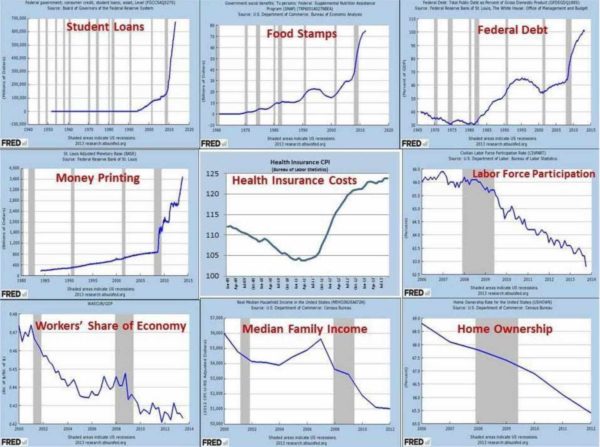