Posted on September 17, 2022 by Steven Hayward in Podcasts

Podcast: The 3WHH Says Drink Up for Constitution Day!

Today is Constitution Day, so naturally conversation at the 3WHH bar turned directly to the question of whether the state-mandated observances of Constitution Day in public colleges and universities are unconstitutional! Naturally there is division on this issue that maps with our ongoing division over the perspicacity of peated whisky. 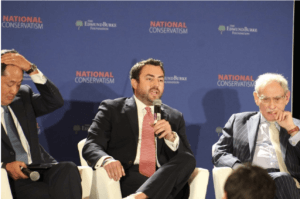 From there we delve into the lively subject of the “National Conservatives,” who met again this week in Miami. John was present for part of the program, and his disposition is well expressed in the photo nearby. We devote a lot of time to looking over the NatCons’ “Statement of Principles,” observing some difficulties, while also expressing cautious support. The NatCon movement is where the action is right now, and deserves attention going forward. I express my longer thoughts here and here.

From there the bartenders ask—what the hell is Lindsay Graham up to? John thinks Graham’s bill to impose federal restrictions on abortion after 15 weeks is unconstitutional, while Lucretia thinks it is perfectly within the four corners of the 14th Amendment to extend the protections of the law to unborn persons. I wonder about the timing, political prudence, and intent of Graham’s gambit.

Finally, we discuss briefly the increasing signal-to-noise ratio of the pre-election polls, which are now producing highly volatile and contradictory findings.

You know what to do now: listen here, or exercise your constitutional right to travel over to our hosts at Ricochet.