Posted on August 24, 2019 by John Hinderaker in Climate

Some years ago, Dr. Tim Ball wrote that climate scientist Michael Mann “belongs in the state pen, not Penn State.” At issue was Mann’s famous “hockey stick” graph that purported to show a sudden and unprecedented 20th century warming trend. The hockey stick featured prominently in the IPCC’s Third Assessment Report (2001), but has since been shown to be wrong. The question, in my view, is whether it was an innocent mistake or deliberate fraud on Mann’s part. (Mann, I believe, continues to assert the accuracy of his debunked graph.) Mann sued Ball for libel in 2011. Principia Scientific now reports that the court in British Columbia has dismissed Mann’s lawsuit with prejudice, and assessed costs against him.

The rules of discovery provide that a litigant must make available to opposing parties documents that reasonably bear on the issues in the case. Here, it is absurd for Mann to sue Ball for libel, and then refuse to produce the documents that would have helped to show whether Ball’s statement about him–he belongs in the state pen–was true or false. The logical inference is that the R2 regression analysis and other materials, if produced, would have supported Ball’s claim that the hockey stick was a deliberate fraud on Mann’s part.

Mann says that his lawyers are considering an appeal. He can appeal to his heart’s content, but there is not a court in North America that will allow a libel case to proceed where the plaintiff refuses to produce the documents that may show whether the statements made about him were true or false.

Mann responded to the dismissal of his lawsuit in typically mean-spirited and dishonest fashion: “The dismissal involved the alleged exercise of a discretion on [sic] the Court to dismiss a lawsuit for delay.” The dismissal was for failure to obey a court order, and the delay went on for eight years.

Fun fact: I learned while tracking down Michael Mann’s statement about the court’s order that he has blocked me on Twitter: 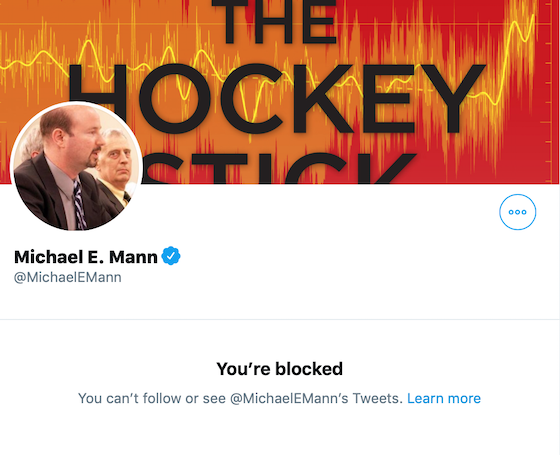 It must have been something I said.