Posted on April 14, 2020 by John Hinderaker in Coronavirus

We Never Needed to Flatten the Curve

The purported rationale for the shutdowns that have crushed our economy and devastated the lives of tens of millions of Americans is the need to “flatten the curve.” We have all seen diagrams like this one many times: 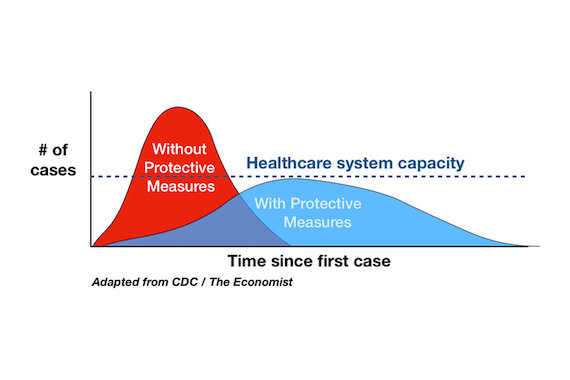 The theory behind curve-flattening is not that the virus will mysteriously disappear while we are all hunkered down, and we will emerge when it is safe to come out. That won’t happen. The point of curve-flattening is to prolong the epidemic, making it last longer than it otherwise would, as you can see in the curve-flattening diagrams. That way, more or less the same number will get sick and the same percentage will die, with one exception: our hospitals will not be overwhelmed by a crush of COVID-19 cases, and so ICU rooms and so on will be available for those who need them. That was the point of the shutdowns–to flatten the curve by stretching out the epidemic.

We know now, however, that the COVID-19 virus was grossly overestimated, at least with respect to the demand its victims would place on hospitals. Weirdly, it is not easy to find a definitive figure for the number of hospitalizations to date. The Centers for Disease Control estimates, if you do the arithmetic, that as of April 4 around 41,250 people were hospitalized due to COVID-19, which seems too low. The COVID Tracking Project pegs it at 62,673 as of April 13. Does that sound like a lot of hospitalizations? As usual, the numbers need a context.

During last year’s flu season, according to the CDC, 490,561 people in the U.S. were hospitalized due to the seasonal flu virus. The prior year, it was 810,000 flu hospitalizations. This explains why, as we noted here, America’s hospitals have not been overwhelmed by the number of Wuhan flu sufferers, not even in New York City. The number of COVID-19 hospitalizations falls well within the natural variability in flu hospitalizations that we always see from year to year.

Once again, government officials are making decisions with catastrophic effects on many millions of lives, on the basis of models that have proved to be wrong. The shutdowns should end tomorrow.