Posted on September 20, 2022 by Steven Hayward in Books, Podcasts 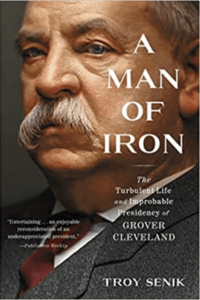 Move over Calvin Coolidge: Grover Cleveland has a valid claim to being regarded as the most constitutionally faithful and fiscally frugal president since the Civil War—a case made splendidly in Troy Senik’s new biography that is being published today, A Man of Iron: The Turbulent Life and Improbable Presidency of Grover Cleveland.

What explains this outlier of a politician, who is so unlike Democrats before him, never mind all the Democrats who came after him? Senik, perhaps better known to the podcast world as the host of “Law Talk” with John Yoo and Richard Epstein, does a masterful job of exploring this remarkable figure, how he rose from obscurity to the White House in less than four years, and how he returned to the White House for a second non-consecutive term, amidst allegations of improper personal behavior and vote fraud. (If this all sounds familiar, it should.)

But wait—there’s more! Troy is the co-founder of Kite and Key Media, and we spend the last few minutes of our conversation on how and why Kite and Key was founded, and the reasons for its deliberate editorial style. Kite and Key is worth checking out and adding to your regular internet rotation, if you haven’t done so already.

Needless to say, I think it’s pretty easy to guess the exit music for this episode.

You know what to do now: listen here, or run non-consecutively to our hosts at Ricochet.