Posted on November 23, 2022 by Steven Hayward in Conservatism, Podcasts 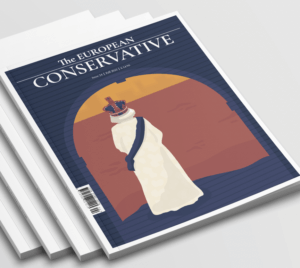 One of my favorite journals these days is The European Conservative, edited by the intrepid Alvino-Mario Fantini out of Vienna. Printed on heavy stock paper, its articles are adorned with fabulous reproductions of classic art, making it the kind of journal you’d happily put out on your coffee table alongside your gallery books from the Met or wherever.

Back in September I wrote here about how the magazine was dropped from the W.H. Smith newsstands in Britain because someone complained about a cartoon that appeared in the summer issue. Here’s the offending cartoon: 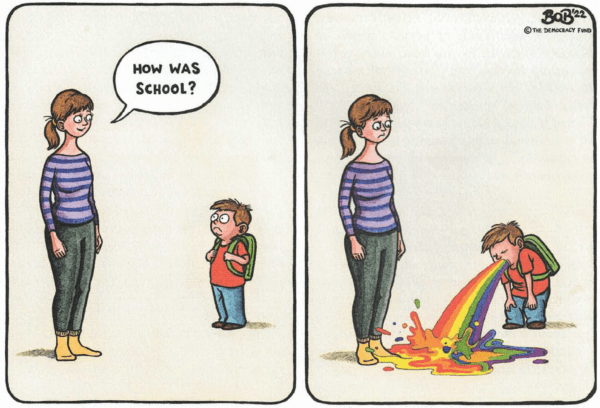 Mario, a born networker (and Dartmouth College alum), has done an incredible job of finding often obscure conservative thinkers scattered throughout Europe and translating their work into English. I caught up with him in person in Vienna a couple weeks ago on my way through town from Budapest to Milan, and we recorded this podcast in a Vienna cafe because it seemed the most authentic. (You could almost imagine Wittgenstein and Hayek—who were cousins!—talking together over coffee in the opposite corner.) We start by looking at some of the often significant differences between American and European varieties of conservatism, and proceed from there.

The fall issue, currently in the mail to subscribers (but not too late to receive if you subscribe now!), offers a useful editorial note which I have taken the liberty of excerpting here:

This journal—and the loose association in which is was conceived: the Vanenburg Society—has always sought to explore and explain the various traditions of ‘respectable conservatism’ in Europe and around the world. We have always seen our task as fundamentally scholarly and instructive, and thus have never shied away from contentious thinkers (or publications) simply because others tell us to. We appreciate and will defend different kinds of conservatism—particularly when they celebrate the classical and Christian humanism that forms the core of our ailing civilization.

Not a bad operating statement.

You know what to do now: listen here, or wander over to your favorite Ricochet cafe: