Posted on August 20, 2022 by Steven Hayward in Podcasts

Podcast: The 3WHH, Raiding Everything in Sight John Yoo assumes the rotating host chair for this week’s episode, since I was on the road much of the week and didn’t keep up with news that didn’t involve whisky (and mermaids). We review what to make of Liz Cheney’s huge defeat in Wyoming, and I gamely attempt to defend the shrewdness of Mitch McConnell from Lucretia’s relentless scorn.

Then we turn to the still-unfolding story and fallout from the Mar-a-Lago raid, noting the late breaking news that the magistrate judge will release a redacted version of the affidavit behind the search warrant, though we suspect our pal Charles Lipson has correctly anticipated what we’ll get (see image left).

The attempted killing of Salman Rushdie has revived one of the oldest bad habits of the left—asserting the moral equivalence between the efforts to restrain the teaching of CRT in public schools and the murderous ideology of radical Islam (The New Republic seriously argued this).

And then we spring a surprise guest—Ryan Williams, president of the Claremont Institute, to comment on the astonishingly positive feature article on Claremont that appeared in the . . . (checks notes) New York Times Magazine: “How the Claremont Institute Became the Nerve Center of the American Right.” Do take the time to read it if you have access to the NY Times, and ponder how many Times staffers must have felt “unsafe” in the newsroom after it appeared. Ryan shares some of the inside story of how it came to be, while I marvel that Claremont gets better treatment from the NY Times than from The Bulwark. One sample from the article: “Claremont was rooted in the plucky outsider, swashbuckling frontier conservatism of California, which shaped its perception of America.” 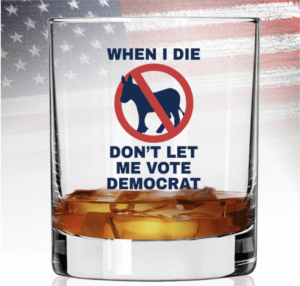 Finally, responding to a listener query, each of us gives a case for optimism to close out this overlong episode that raided just about everything in the news.

By the way, we’re working on sourcing some new 3WHH whisky glasses which we hope to make available as swag for fans, but we promise it won’t look like the one pictured left here, though it is tempting.

(Trick question: what’s wrong with this picture? Hint: Just think about one of our closing slogans. . .)

P.S. Since we talk a little bit about emissions at one point, special exit music this week consists of a real blast from the past from Allan Sherman.

You know what to do now: listen here, or shambol (I know—not a real word) your way over to our hosts at Ricochet.