In Venezuela, the End Game Approaches

The last few days have seen an escalating crisis in socialist Venezuela. That country’s economy has virtually ceased to exist. Millions have fled rather than starve. Venezuelan currency has become worthless. The U.S. and 50 or so other nations have recognized Juan Guaido, President of the National Assembly, as interim president of Venezuela. (He has declared himself interim president, and has a colorable right to do so under Venezuela’s constitution.)

The U.S. and other nations are trying to deliver humanitarian aid in the form of food and medical supplies to Venezuela. Hospitals, along with everything else, have almost completely ceased to function. They often do not have running water, let alone medicines, on account of Bernie Sanders-style socialism. Maduro has closed his country’s borders and is blocking the aid convoys from entering. Similarly, an aid ship departed from Puerto Rico, loaded with supplies for starving Venezuelans, but the aid ship retreated back to Puerto Rico when Venezuelan authorities threatened to fire on it.

Currently, the main standoff is at the Simon Bolivar International Bridge between Colombia and Venezuela, but similar dramas are being enacted at other international crossing points. This photo shows the Simon Bolivar bridge shortly after Maduro’s forces set fire to some of the aid trucks: 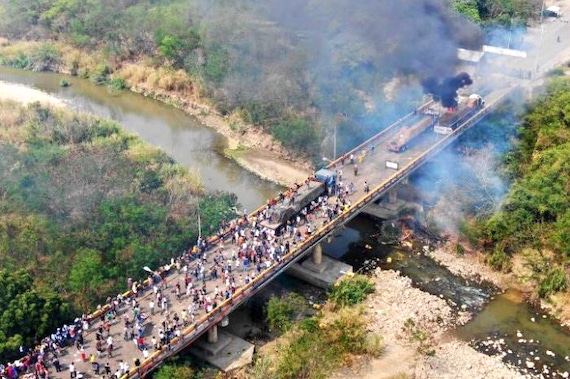 There is an irony here, since Venezuela, blessed with astonishing natural resources, has traditionally been the richest of Latin American countries, while Colombia has been backward, oppressed by drug cartels. But things have been trending upward in Colombia even as Venezuela, under the spell of socialism, has cratered. So now it is Colombia that is trying to help feed the masses of Venezuela, starving on account of the same socialism that leading Democrats want to bring to the U.S.

Maduro’s soldiers have fired on pro-Guiado (or maybe just anti-starvation) Venezuelans at multiple international crossings, killing at least four and injuring hundreds. If you are a socialist dictator, pretty much the only thing that matters is maintaining control over the armed forces. Stalin, after all, died in his bed. But when that control starts to waver–typically, when soldiers refuse to fire on anti-government demonstrators–a trickle can quickly turn into a cascade.

That, I think, is what is happening in Venezuela. So far, more than 60 Venezuelan soldiers have defected to the anti-Maduro side. One small group drove a truck through the barriers on the Simon Bolivar bridge, to seek freedom from socialism in Colombia. A photograph of the dramatic moment: That’s the trickle. The cascade is not far behind. Maduro is doomed.

America’s Democrats have, to a remarkable degree, lined up behind the failed tyrant Maduro. They have denounced Guaido as a “right wing extremist”–a ridiculous claim–and have accused President Trump of orchestrating a “right wing coup” against Maduro. It is hard for them to let go of the socialist fantasy.

But you can see which way the winds are blowing. Democrats who seriously want to be president in 2020, unlike agitators like Alexandra Ocasio-Cortez and Ilhan Omar, who relentlessly spouts the Iranian mullahs’ line on Venezuela, are hedging their bets. Hence this Politico headline: “Sanders, Harris weigh in on Venezuela, call for restraint from Maduro.” “Restraint” means not murdering lots more Venezuelans. Which also means winding up like Nicolae Ceaușescu or Benito Mussolini. But the Democratic presidential candidates don’t care. They are throwing their ally, and former exemplar of socialist virtue, under the bus.

On the plus side of the ledger, Senator Marco Rubio has distinguished himself as a tireless advocate for freedom in Venezuela. He has gone to Colombia and stood on the Simon Bolivar bridge. His Instagram posts, mostly in Spanish, are meant to encourage opposition to Maduro in Venezuela and across Latin America. Check this out, for example: Marco has come down firmly on the side of freedom–and, not coincidentally, the side of America–in what is becoming a significant political issue in Florida. This might not be Marco’s finest hour, but it is definitely on the list.

And the timing of Venezuela’s socialist collapse is fortuitous in the context of the 2020 presidential campaign. Even America’s mostly brain-dead liberal reporters can hardly help asking Democratic Party presidential candidates what they have to say about the socialist disaster that is Venezuela.