Tuesday evening my organization hosted Mollie Hemingway at our annual Fall Briefing, where in past years we have featured speakers ranging from Benjamin Netanyahu to Mark Steyn. The subject of the event was Mollie’s hot-off-the-press book, Rigged: How the Media, Big Tech, and the Democrats Seized Our Elections. Mollie’s book is 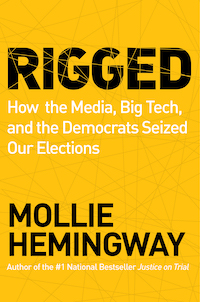 important, I think, because it casts a sober eye on what really happened in 2020. What took place was a scandal, but not because the Democrats hacked into a few voting machines. Their strategy was far smarter, far more sophisticated, and far more effective than that. You really need to read Rigged to understand what happened last year, and what we need to do to prevent it from happening again.

Our event was sensational: sold out, at the most beautiful venue in the Upper Midwest, Sovereign Estate Winery. We took a chance: we had planned on holding the Fall Briefing at the Ordway Theater in St. Paul, as we did in the last two years before covid. But at the 11th hour, the Ordway imposed a mask mandate–everyone in the building would have to wear masks at all times–and said they might limit capacity at any moment, due to covid. So that we might sell 750 tickets to a fundraiser, and then only 250 people would be able to attend.

That was obviously unacceptable, and Sovereign Estate, owned by friends and uniquely beautiful if the weather holds, was a great alternative. Plus, they produce really good wine. As it turned out, our sold-out crowd enjoyed the last beautiful evening of the year. Mollie’s speech, based on her book, was terrific. What happened in 2020 was seamless. It went all the way back to the Russia collusion hoax that began in 2016. One of the critical factors in 2020 was Zuck Bucks, Mark Zuckerberg’s commitment of more than $400,000,000 to help elect Democrats by substituting a corps of Democratic Party activists for the civic officials that were nominally in charge of elections in key blue counties, like–for example–Fulton County, Georgia. One of the most remarkable stories in Mollie’s book comes from Green Bay, Wisconsin, where Zuckerberg-funded left-wing activists took over the election to the point where the local official who was supposed to be in charge gave up, and resigned shortly before Election Day.

I can’t begin to summarize Rigged, but I recommend that you buy and read it–both for what it reveals about the corruption of last year’s election, and as a corrective to less well-founded theories that have brought criticism of the election into disrepute. While still pointing out, of course, that until November 2020 it was Democrats who repeatedly voiced worries about insecurity in electronic and mail-in voting, and how such insecurities might benefit Republicans. But as of November 2020, the Democrats, having won the election, banned any such conversation in the mainstream press and on social media.

I can only add that Mollie herself is delightful. She is a leader in the younger generation of conservative pundits. Her research is copiously footnoted, her persona is moderate, her conclusions are carefully and inexorably drawn from the data she presents. I recommend that you buy her book.

Finally, for the first time as far as I know, Tuesday evening’s event made TikTok.