The Tragedy of Donald Trump

Good grief, I go away for a day, listen to sports talk radio, music, and podcasts on political philosophy in my car driving back home all day from LA because I was too depressed about the Georgia election outcome to want to hear the news, and discover that all this happened.

I have quickly written a long piece at the request of a magazine, and if they run it tomorrow I’ll post a link here, or if they decide not to run it, I’ll post the whole thing here. I will share the last paragraph of my draft:

This specter raises afresh the difficult question that has divided Americans for the last four years: just exactly what is the character of Donald Trump? He has shown great perception of the defects of our political order; he has had many salutary achievements in office; he has fought hard for worthy objects against the intransigent opposition of the permanent government and the partisan media; his love of country is undoubted; he has given new hope to many unheard and hitherto unrespected Americans. At the same time his careless public pronouncements of the circumstances have fallen short of the standard of the high statesmanship most needed—never more so than his remarks on the Capitol Mall on Wednesday. He has left himself vulnerable to the charge that he will exit office amidst a flurry of “pulling down” not only fellow partisans, but the very institutions of government itself, such as the Supreme Court. President Trump will not succeed in overturning the election result, but he may have succeeded in squandering what could have been the kind of out-of-office influence not seen since Theodore Roosevelt. Instead, years from now we’re likely to see a slew of books on the theme, “The Tragedy of Donald Trump.”

• Having been a visitor to the Capitol and the various House and Senate office buildings many times over the years as security has steadily increased, I am stunned at the apparent collapse of the Capitol police in the face of infiltrators. The Wall Street Journal reports that the Capitol police were “unprepared.” This is strange, and unacceptable. One wonders. . .

• Was this, to some extent, a false flag operation? Judging by the pics of some of the Capitol marauders, it is hard to dismiss the possibility. Seriously: 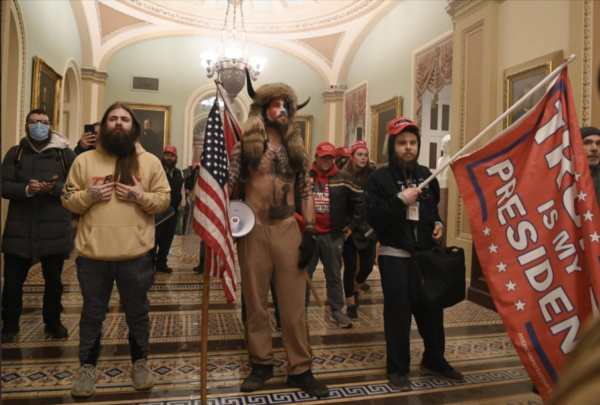 But Andy Ngo, who I’d trust on such questions, says it wasn’t an Antifa false flag.

• In my casual canvas of social media and other screens, I am struck by how many people who have supported Trump for the last four years have found today’s events over the line.

• I’m going to be interested in seeing how many media accounts say that the protests today were “mostly peaceful” (which is true). I’ve heard only one such characterization. To the contrary, am I the only one who detects a barely concealed glee in the non-stop, furrowed-brow media coverage going on right now? This is not to excuse Trump for blundering, but our garbage media can’t help themselves, and while Trump will be gone two weeks, we’re stuck with these horrible people.

• I never did get tired of winning.