Who Is Darrell Brooks?

Darrell Brooks is the career criminal who drove his vehicle into a Christmas parade in Waukesha, Wisconsin, killing at least five and injuring many more. As Paul has noted, Brooks was a vicious criminal who never should have been on the street. Already, Milwaukee County’s left-wing District Attorney is backtracking, saying that his own office didn’t make a proper bail recommendation during Brooks’s latest encounter with the criminal justice system. Gosh, I wonder how that could have happened, given that America’s urban prosecutors are largely selected by George Soros?

But another question should be asked: was Brooks inspired to commit mass homicide by liberal bromides relating to race, specifically the Black Lives Matter movement? Your local newspaper won’t touch that question, but Andy Ngo, an actual journalist, has been investigating:

Darrell Edward Brooks, the man who was taken into custody by police over the #Waukesha Christmas parade mass casualty event, had posted a quote in 2016 on a now-deactivated Facebook account: "Run them over. Keep traffic flowing & don't slow down for any of these idiots…" #BLM pic.twitter.com/d8bYZPv8bd

Darrell Edward Brooks, the man who was taken into custody by police over the #Waukesha Christmas parade mass casualty incident, expressed hatred of former president Donald Trump in one of his rap tracks. He also expressed black nationalist antisemitic views. #BLM pic.twitter.com/BhT7BrX5mL


Assuming these screen shots are authentic, and I have no reason to doubt that they are, the connection between Brooks and BLM/Democratic Party ideology appears clear. I would particularly note a couple of points.

First, Brooks, like so many liberals, is anti-Semitic. See his post, “Hitler Knew Who the Real Jews Were.” Second, Brooks posted this graphic, which well illustrates the core BLM ideology–the false claim that police officers treat blacks differently from whites, Asians and Hispanics, based solely on their race: 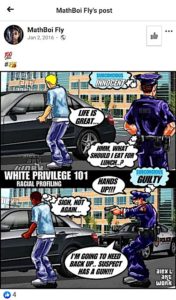 This is, as the graphic says, “White Privilege 101.” And this kind of nonsense has been fed to black Americans non-stop by the New York Times, the Washington Post, the Associated Press, CNN, MSNBC, and many other news outlets for a number of years. We know that Brooks absorbed and expressed the anti-white, anti-American, and anti-conservative themes that liberal media have been promoting for a long time. Is this why he climaxed his criminal career by driving his vehicle into a Christmas parade and killing and wounding something like 45 people, including a number of children?

I don’t know, but the question needs to be pursued. “Mainstream” media sources like the New York Times and the Washington Post have been spewing hatred for years. Is their promotion of hate against America, against conservatives, and against white people, impotent and irrelevant? Or has it had tragic results, with mass murder in Waukesha being just one of them?

No one can doubt that if Darrell Brooks had been a conservative who drove his car into a mostly-liberal parade, every news outlet in America would have condemned him out of hand, without any investigation. Remember what happened in Charlottesville, years ago, when a guy drove his car into the rear of a car that was pushed into a third car that went into a crowd of liberals, killing one. Liberals are still talking about it–lying about it, in fact. Was Brooks’s mass murder the same thing, only five times as bad? Or was it even worse?

It would be a good thing if the U.S. had more than a handful of actual journalists, like Andy Ngo, who would look into questions like this one.